A Mediterranean river with irregular precipitation.
Last tributary of the Rhone river, the source of the river is in Lozère.
The Gardon is an assemblage of many smaller Gardon rivers that are named after the cities they cross, such as Alès, Anduze, Mialet… Together, they form the gorges du Gardon: a bigger karst system that has still not revealed all its secrets.

An industrial and mining past.
Gold panning.
Swimming area all along the river.
Gravel operations. 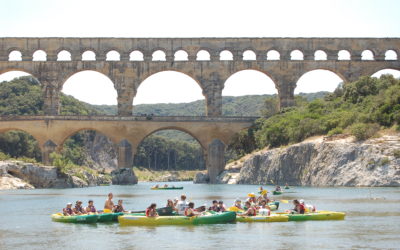 Management of the canoeing activity on the Gardon River

Within the Gorges du Gardon BR, there are 8 more or less developed canoeing sites, that were built without authorization, despite the designated area and water legislation. More than 1,000 canoes belonging to 5 professionals paddle in the gorges. Most of the trips are...

END_OF_DOCUMENT_TOKEN_TO_BE_REPLACED
View the other Biosphere Reserves